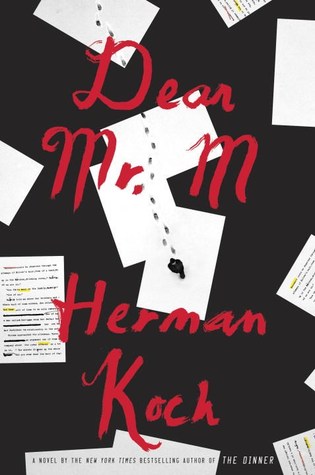 Once a celebrated writer, M’s greatest success came with a suspense novel based on a real-life disappearance. The book was called The Reckoning, and it told the story of Jan Landzaat, a history teacher who went missing one winter after his brief affair with Laura, his stunning pupil. Jan was last seen at the holiday cottage where Laura was staying with her new boyfriend. Upon publication, M.’s novel was a bestseller, one that marked his international breakthrough.

That was years ago, and now M.’s career is almost over as he fades increasingly into obscurity. But not when it comes to his bizarre, seemingly timid neighbor who keeps a close eye on him. Why?

From various perspectives, Herman Koch tells the dark tale of a writer in decline, a teenage couple in love, a missing teacher, and a single book that entwines all of their fates. Thanks to The Reckoning, supposedly a work of fiction, everyone seems to be linked forever, until something unexpected spins the “story” off its rails.

Yes, I have certain plans for you, Mr. M. You may think you’re alone, but as of today I’m here too. In a certain sense, of course, I’ve always been here, but now I’m really here. I’m here, and I won’t be going away, not for a while yet.

Herman Koch’s novel, Dear Mr. M, starts out ominous enough with some insight into M’s downstairs neighbor. It’s clear from the beginning that this neighbor, whose name we later learn is Herman(!), has unresolved issues with the novelist and isn’t exactly about to handle them in a healthy way.

I read Koch’s novel, The Dinner, a few years ago and found I really enjoyed the psychological build up he creates within his story lines and how multifaceted he makes his characters. Dear Mr. M is no exception – it slowly builds in intensity, often leaving the reader in the dark about details until the very end. But more than the plot itself, what I love about Herman Koch’s books is his ability to create characters that while often twisted and completely unlikeable, are fascinating to read about – even when the reader may find him/herself wondering if people could truly be that despicable.

Dear Mr. M alternates narratives, mainly between M and Herman, but there are several chapters interjected that feature M’s wife, Herman’s teenage girlfriend, and the (missing? murdered?) teacher, Jan Landzaat. Through these different points of view, the reader is slowly exposed to a story line that explains the truth behind M’s bestselling novel, Payback – a book based on real events.

While overall I enjoyed the changes in point of view, there were times when it felt a bit sloppy and unnecessary. Several of the chapters shared a lot of information that I personally felt strayed away from the plot, particularly those that focused on Herman’s adolescence. While still interesting to read, they made the mystery of what happened to Jan Landzaat seem a bit disjointed. What had hooked me in the beginning ultimately got muddied by the end of the book.

Despite these issues, I still enjoyed the novel as a whole. Dear Mr. M may not have held the intensity for me that The Dinner had, but I still found myself absorbed enough to want to see how events would unfold and luckily, I wasn’t disappointed in the finale.

Thank you, Netgalley and Hogarth, for giving me the chance to read Herman Koch’s newest novel before its publication date!