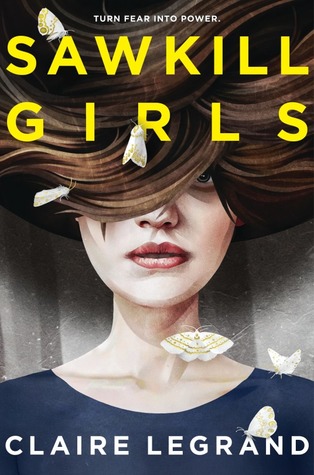 Beware of the woods and the dark, dank deep.

He’ll follow you home, and he won’t let you sleep.

Who are the Sawkill Girls?

Marion: the new girl. Awkward and plain, steady and dependable. Weighed down by tragedy and hungry for love she’s sure she’ll never find.

Zoey: the pariah. Luckless and lonely, hurting but hiding it. Aching with grief and dreaming of vanished girls. Maybe she’s broken—or maybe everyone else is.

Val: the queen bee. Gorgeous and privileged, ruthless and regal. Words like silk and eyes like knives, a heart made of secrets and a mouth full of lies.

Their stories come together on the island of Sawkill Rock, where gleaming horses graze in rolling pastures and cold waves crash against black cliffs. Where kids whisper the legend of an insidious monster at parties and around campfires.

Where girls have been disappearing for decades, stolen away by a ravenous evil no one has dared to fight… until now.

Hello! It’s been several months since I last posted, but that definitely doesn’t mean that I haven’t been reading. I’ve recently changed jobs which has required a bit of an adjustment period! One perk to the new position is that I am within walking distance of my library. I’ve taken advantage of that and have been flying through stacks of borrowed books over the last few months. Sawkill Girls by Claire Legrand has been one of my most recent choices.

Let me start by saying this is a strange book, but I don’t mean that with any negative connotation. I expected it to be more of a straightforward thriller, but this was a great blend of YA drama and science fiction. I found myself drawing a lot of comparisons to Stranger Things as the story progressed.

I loved the plot and was thrilled by the not-so-subtle feminist themes. These are female characters that don’t need men to protect or save them; in fact, the men rely on them for both their emotional and physical power.

‘Why do the monsters eat girls?’ she asked at last. Her voice sounded small.

When Marion didn’t answer, Zoey turned on her side to face her. ‘Marion?’

‘Because,’ Marion answered, looking beyond Zoey to the sea, ‘when a predator hunts, it seeks out the vulnerable. The desperate.’

Zoey’s laugh was bitter. ‘Oh, and we poor delicate girls are vulnerable and desperate, is that what you’re saying?’

‘What I’m saying,’ Marion said, now looking right at Zoey, her gray eyes bright, ‘is that girls hunger. And we’re taught, from the moment our brains can take it, that there isn’t enough food for us all.’

There was such a powerful message spurning the story forward and combined with the super creepy supernatural elements, Sawkill Girls is unlike anything else I have ever read. There were times where it felt a little over the top in regards to the author’s descriptive prose and this sometimes made the story drag quite a bit for me, but I may have just not been the best audience for her writing style. Ultimately, the feminist themes  and frightening monster elements still won me over. I would love to read more books like this in the future!